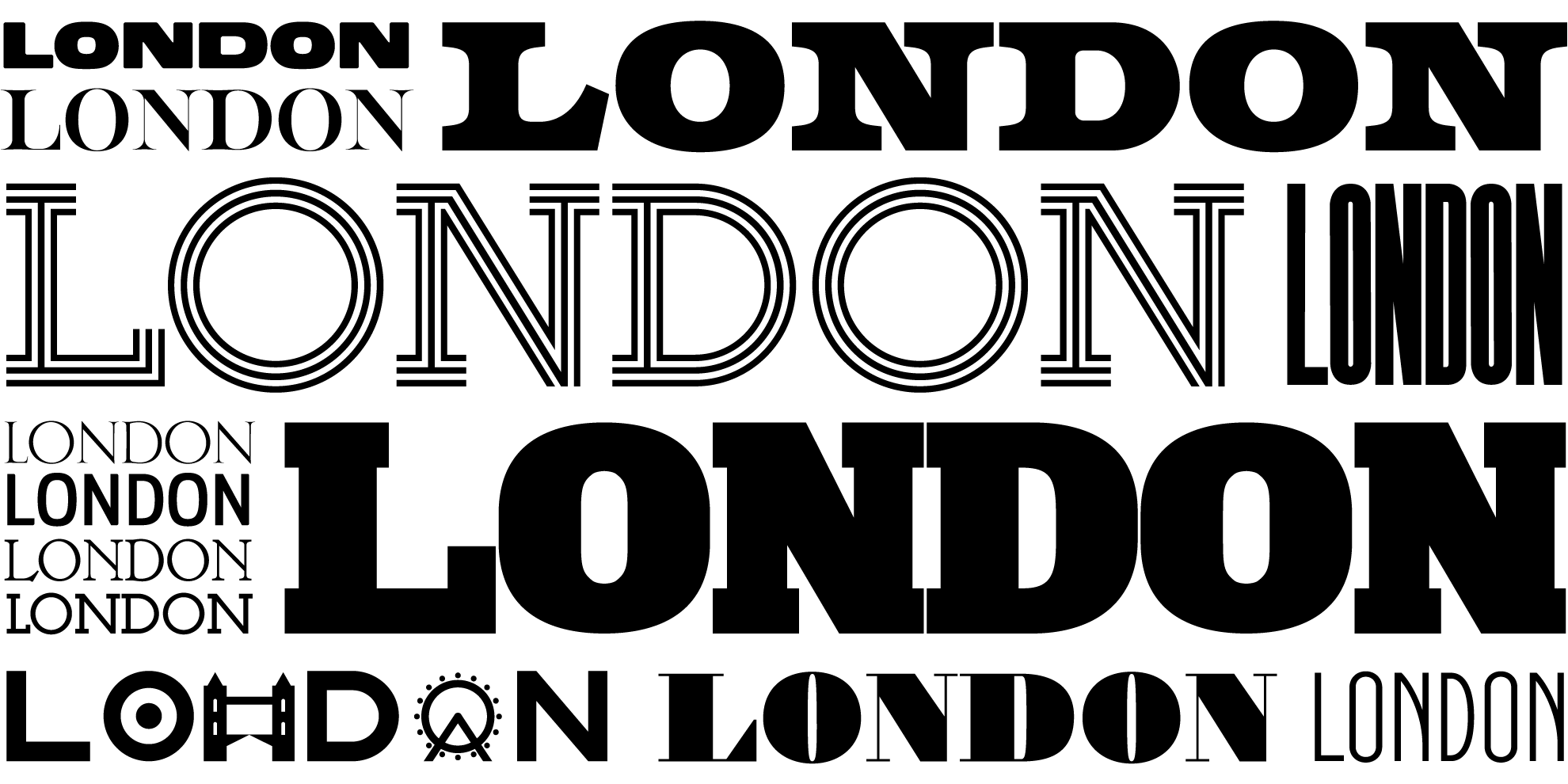 Antique Victorian bill posters, the city’s architecture, the nightlife and bustling economy, the boroughs, the history, its renowned press, print and publishing culture; all these rich ingredients and more are reflected in the versatile and multi-faceted London Type collection.

The foundry was formed by Paul Harpin, Paul Hickson and Joe Graham. These three had known eachother for years but it wasn’t until they came together in 2014, when Harpin launched the BuyFontsSaveLives initiative, that a more formal collaboration began. London Type was unveiled in 2017.

After gaining a first class degree in Graphic Design, followed by stints at Walker Pinfold Associates and Banks & Miles, Paul concentrated on designing magazines and his first two collected Magazine Of The Year Awards. At this time he was also design consultant for the Chartered Society of Designer’s magazine DESIGNER. At the age of thirty he became group art director at Centaur in charge of nineteen magazines including Creative Review and Design Week, then creative director at BBC Redwood in 1990 working for many prestigious clients like M&S and American Express as well as launching many BBC magazines like Top Gear and Gardener’s World.

In addition to designing type Paul still works as an editorial and branding design consultant, working with Geoff Waring — Harpin & Waring. Paul has extensive experience as a type user that he finds useful when designing new fonts. He is a Fellow of the Royal Society for the Arts, the founding chair for the Editorial Design Organisation, loves drawing, printmaking and quite stupidly is a Charlton fan; that has brought him many years of experience as a loser. He has been responsible for the creation and art direction of over 300 magazines. He designed his first font called LAURA to start buyfontssavelives which sell typefaces to support two cancer charities after his niece had died.

Paul Hickson splits his time between drawing type and playing in the Itchy Fingers country-blues ragtime quintet. He started as a trainee letter cutter and typographic draughtsman at Letraset, after 4 years at Hornsey College of Art.

A move to Face Photosetting in London’s west end saw immersion in the “sharp end” of artwork origination for the advertising and broadcast industries. Paul later took over the production of original font designs for the Face group where he met his future wife and business partner Pat. Both of them eventually teamed up as joint heads of the font creation department at Quick Brown Fox.

After the demise of QBF and a short period with Drawing Board in Manchester he and Pat set up their own Lettering and Typographic consultancy, P&P Hickson, working on many corporate projects including Easyjet, Sainsbury’s, Hotels.com and Tesco.

Joe was born in Bangor, N.Ireland, and moved to Manchester in 1985 to study French & History at Manchester University.

After graduating he indulged his passion for music by editing the Recoil fanzine for a couple of years before a baptism of fire and criminally long hours at the GBM Group learning the Macintosh and heading up their print bureau.

In 1994 Joe moved to London and began a long association with Fontworks, the UK arm of Fontshop, initially as Tech Support Manager. Within 2 years he was head of Special Projects, handling the company’s custom font business and corporate licensing before eventually becoming General Manager.

After 17 years in one place Joe needed a fresh challenge. In 2011 he left Fontworks to set up his own consultancy Typespec Ltd with a focus on custom font development. The company also assists and collaborates with key small foundry partners such as G-Type, Doves Type, ArtyType and Paul Harpin’s BuyFontsSaveLives initiative which has thus far raised in excess of £80K for cancer charities.